View of Novorossiysk from Usadba Myskhako

I caught the Aeroexpress train from Paveletskaya to Domodedovo to catch a S7 flight on Tuesday afternoon. Aeroexpress takes from 40 to 50 minutes, with a round trip ticket cost of 620 rubles. The entrance at Paveletskaya is a little seedy, as might be...

END_OF_DOCUMENT_TOKEN_TO_BE_REPLACED

Nine wineries in three days, and a dinner with a representative of a tenth – that's how the schedule stacked up for me and John Ortega, on an early spring excursion through Russian Wine Country. I wanted to return to the countryside where I spent my first...

END_OF_DOCUMENT_TOKEN_TO_BE_REPLACED

Stavropol Region Wines Passport Magazine (Moscow) March 2011 Text and photos by Charles Borden The northern route of the Silk Road crossed Stavropol region long before it joined Russia’s frontier at the foot of the Caucasus mountains. During...

END_OF_DOCUMENT_TOKEN_TO_BE_REPLACED

Passport Magazine February 2011 Text and photos by Charles Borden Vinzavod, literal translation “wine factory,” was the term used in the former Soviet Union and now in Russia for the plant and facilities that manufacture a grape-flavored alcoholic beverage called vino...

What is Russian Wine Country? 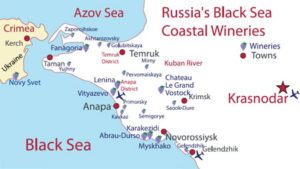 This Russian Wine Country website focuses the area of Russia that has been the primary focus of Western winemakers since the end of the USSR due to the potential of its terroirs. It is the area that stretches alonmg the Black Sea coast from just south of Gelendzhik to the Taman Peninsula along the south coast of the Azov Sea. The first modern winery of the region, Chateau Le Grand Vostock, was developed in 2003 by French wine professionals and builders with all French equipment. Since then, about 20 modern wineries have opened. Most have been “green-field” but a few Soviet era wineries have successfully transformed to modern operations. In addition, there are 15 or so “garagistes” that are producing respectable wines, and certainly many of them will transform into larger operations in the coming years.
Russian wineries grow many white and red wines French varietal grapes such as Cabernet Sauvignon, Merlot, Chardonnay, Aligote, Muscat and Sauvignon Blanc, and indigenous Georgian and Russian varieties such as Rkatsiteli, Krasnostop, and Saperavi.
This website only features wineries that produce wines from Russian grapes, either from their own vineyards or purchased from neighboring vineyards. Even with this restriction, we are aware that some of the wineries listed also produce wines from imported “wine material” or concentrate. To the degree possible, we try to limit our information to authentic Russian wines produced from grapes grown in Russia.

History of Wines of the Caucasus Region

Georgia is considered to be the source of the world’s first domesticated grape vines. Wine was produced in Greek settlements along Russia’s Black Sea coast over 2,500 years ago. In the late 19th century, there was a brief revival of the wine industry with the founding of several wineries including Abrau Dyurso in Russia, and Novy Svet and Massandra on the Crimean peninsula.

After the Russian Revolution, wine production was industrialized and developed by state and collective enterprises. Most of the republics of the USSR produced some wine, however the largest producers were Moldova, Ukraine, Georgia, and Russia. Russia’s wine grape growing areas developed in the Krasnodar, Stavropol and Rostov regions and the semi-autonomous republic of Daghestan, all in southern Russia between the Caspian and Black Seas.

The former Soviet Union (FSU) was the fourth largest wine producer in the world in 1980 behind Italy, France, and Spain. It produced 4.8 billion liters of wine, over three times as much as the United States. However, by 1990, wine production had declined to 1.6 billion liters, primarily due to USSR President Gorbachev’s anti-alcohol campaign during which vineyards and production facilities were destroyed.

Historically, Russian consumer taste has favored sweet and sparkling wines. During the Soviet era, strong or “fortified” wines became very popular carrying names such as portwine, madera, or sherry. Sparkling wines are very popular in Russia and are produced from “wine material,” a technical term for grape juice that has been fermented either at Russian wineries or imported from other countries. It is estimated that as much as or more than 80% of wines labeled as Russia wines are actually made from such imported wine material or from imported grape concentrate. For wineries outside of Russia’s grape growing region, such as those in and around Moscow, imported “wine material” is the principal base for Sovietskiy Shampagnskoye (“Soviet Champagne”), which is ubiquitous at Russian New Year and Women’s Day parties.

However, modern Russia has learned about and now enjoys wines from around the world. In recent years many have begun to understand that their own country has capabilities to produce excellent wines to rival many of the imports.

There are two principal types of wineries in Russian Wine Country: 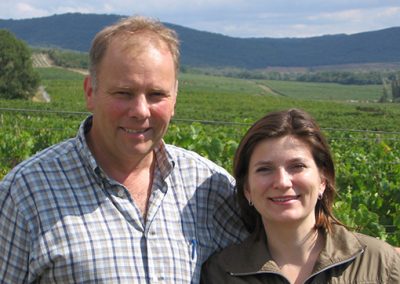 Many of the images in the Russian Wine Country Galleries have been contributed by Igor Ulko, who together with his wife Olga, have for years provided beautiful images of Russian Wine Country: its countryside, wineries, and the people who have developed fine Russian wines. If you require any type of professional photography in the Krasnodar region, please contact Igor and Olga.
Contact:
+7 988 33 67 477
www.ulko.ru

The Russian Black Sea resort city of Anapa is the gateway to a Russia’s rapidly developing wine region, an area that is capable of producing wines to rival the world’s great regions. The potential for production of quality red and white wines is unsurpassed in the countries of the former Soviet Union.
Anapa is a well-known Russian family resort with sand beaches and comfortable accommodations.  Take a weekend or weeklong vacation to Anapa and see this wine country first hand. There are numerous daily direct flights of about two hours to Anapa from all of Moscow’s major airports.
Late spring before the summer crowds arrive, and September and October after they leave are the best time to visit. In September, the hotels that line Anapa’s golden sand beaches have emptied and prices are low. There are many full service health resorts around Anapa (called sanatoria) and hotels that have first class rooms. The top hotels in the city are the Valentina and Park Hotel.
For more information about tours and visits, RussianWineCountry is partnering with the leading local information source, WineHolidays.ru.

Where to Find Russian Wines in Moscow

When Charles Borden first visited Russian Wine Country in September 1992 just after the demise of the USSR, he became the first Western investor to take an interest in the potential for wine in the region. He has continued his interest and traveled to the region for the past 25 years.
In 2014, after writing many articles about the wines and wineries of the region, he published Russian Wine Country: Sleeping Beauty Awakens, which is available on Amazon.
From 1992 to 2000, Mr. Borden worked with two wineries of the former Soviet Union, and became the first to bring modern packaging to wineries in southern Russia that had little or no bottling facilities. He was responsible for two joint ventures to package some of Russia’s best wines using the modern bag-in-box system, which has now been adopted by many Russian wineries.
Mr. Borden is currently IT Manager for OLMA Fund, a Paris private equity fund with investments in France and Russia that includes Domaine Chanzy, a 100 hectare Burgundy wine producer, and Chateau Signac, a winery with 38 hectares in Côtes du Rhône. He is also Director and Editor for FinancePlus, a Paris-based information service that publishes information about mid-market mergers and acquisitions, and venture capital and private equity investments for markets worldwide (www.financeplus.com).
Charles was previously Contributing Editor and Wine and Dine Reviewer for Moscow’s Passport Magazine for eight years, and was previously Editor of the English version of the Aeroflot inflight magazine, Russian Fine Art, and Russians: Yesterday, Today, Tomorrow. From 2003 to 2010, he contributed to the annual edition of Hugh Johnson’s Pocket Wine Book, one of the world’s most important wine books, which is also published in Russian language.
Charles is Moscow’s “consummate wine buyer” – a consumer’s friend and expert in the intricacies and complications that a shopper faces when buying a wine at a restaurant or shop in Russia.