Vinzavod, literal translation “wine factory,” was the term used in the former Soviet Union and now in Russia for the plant and facilities that manufacture a grape-flavored alcoholic beverage called vino (wine). Many of the Soviet Union’s largest vinzavods were located and continue to operate in the big cities far north of the grape growing areas of southern Russia. Three of the biggest are in Moscow. Another in Moscow has been converted to a trendy modern art district.
In Soviet Russia, except in parts of the south, vino production for the masses became a technical process divorced from the messy, fussy, expensive, capital-intensive and weather-dependent nurture and growth of wine grapes. Missing was the romance of “terroir,” the relationship between grape, climate, sun and soil so valued by Old World winemakers for centuries and New World winemakers for generations. Although winemaking thrived along the Black Sea coast in Greek villages 2,500 years ago, Russia’s first wineries opened there only towards the end of the 19th century. The development of the art of winemaking, the winemaker’s link between the vineyard and the process of vinification, was stunted after the Revolution. 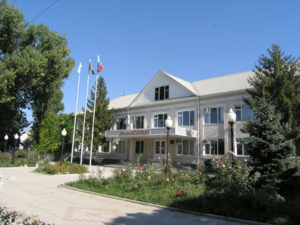 In the Russian vinzavod of today, vino-material (fermented grape juice) is the principal ingredient. It comes from one or a combination of sources: bulk wine imported by container or grape concentrate shipped by the barrel from countries such as Tunisia, Spain or Chile, or from grapes produced in southern Russia in the regions between the Black Sea and the Caspian Sea. The vineyards of southern Russia do not produce nearly enough grapes to meet domestic consumer demand, and they are neither cost- nor quality-competitive with large western grape producers. Other ingredients of Russian vino could include sugar, alcohol, and essences and aromatics produced in Eastern and Central Europe such as “essence of Riesling.”

Southern Russia inherited about two dozen vinzavods from the Soviet Union, mostly state farms that produced wine from their own grapes. I first visited one of these wineries on the Black Sea in 1992, and visited many others in the following ten years. I met many dedicated winemakers. What they lacked in modern winemaking knowledge and technology, they made up for with affection, and they developed their own style and techniques. When the Soviet Union fell, these wineries were privatized. South Russia’s winemakers soon faced a daunting task on several fronts: the vagaries of grape production, the legacy of antiquated Soviet-era equipment and focus on production of sweet wines, and pressure of economic competition to produce cheap wine even if this meant using imported vinomaterial, concentrate and aromatics.

Some of southern Russia’s wineries of 1992 did not survive and a few conceded to economic pressure. Vineyards were converted to supply and blend with imported vino-material in modernized vinzavods. In my travels I heard that one of these wine factories that made sixteen types of Russian wine from one type of imported Spanish bulk wine.

Only handful of southern Russia’s old vinzavods remained essentially wineries, and there is just one significant newcomer. These few produce wines from their own grapes, have planted new vineyards with Russian and imported varietals, purchased modern equipment and invited in western wine-makers as advisors. They are well deserving of the name “winery” rather than wine factory moniker.

Last month we covered one of those wineries, Russia’s national treasure and sparkling wine producer, Abrau Durso, originally founded in 1870. Some of the more interesting and colorful, and developing wineries of southern Russia include Chateau Le Grand Vostock (the newcomer), Fanagoria Winery and Myskhako Winery.

Chateau Le Grand Vostock (Krimsk districk, Krasnodar), the newcomer, was built in 2003 with French equipment and technology and under the constant stewardship of Frank Duseigneur and his wife Gael Brullon. CGV has almost 300 hectares of vineyards with both French varietals and Russian/Georgian wine grapes. In the French tradition, they produce coupage (blended) wines at several levels of aging and quality.

Fanagoria, with over 2300 hectares of grapes, is Russia’s largest winery. Fanagoria’s Cru Lermont line is produced from French varietal grapes that were imported and planted in 1997. New European crushing equipment has been installed.

Myskhako is located on Wizard Mountain overlooking Russia’s main Black Sea port. It was a favorite of Soviet President Leonid Brezhnev, who fought in the Battle of Novorossiysk during the Second World War. Myskhako has a small tasting room incorporating the table used by the Politburo during visits with Brezhnev to the winery. Some of Myskhako’s better wines are its crisp, white Aligote and Chardonnay wines.

Today’s Russian wineries face a newer threat, the tarnish on the name Russian wine from the vinzavods. By permitting wines to be sold as Russian with little or no Russian grape content, Russia is unique among wine producing nations. Every modern winemaking country protects winemakers with an appellation or name control system such as France’s Appellation d’origine contrôlée (AOC) or Italy’s Denominazione di origine controllata. Southern Russia, which lies at the same latitude as northern Italy and southern France, has the potential to produce great wines but that potential will never be achieved unless the consumer knows what a real Russian wine is.

Also, Russia as yet has no small winery and winemaking industry because of the great hurdles that all small Russian businesses face, even larger due to the necessity to obtain various alcohol licenses. The reduction of these barriers for small winemakers, and a true appellation system could give southern Russia the opportunity to develop the potential that French winemakers recognized in the region in the 19th century. Perhaps before the 2014 Olympics or 2018 World Cup.