Raevskoe Winery Website
Raevskoe Winery Facebook
Raevskoe has about 150 hectares vineyards just off the M25 near the turnoff to Raevskaya village, which is 8 kilometers south. Raevskoe’s vineyards consist of 19 varieties including Cabernet Sauvignon, Merlot, Cabernet Franc, Carmenere, Pinot Noir, and Petit Verdot. In addition, it has vines of Odessa Black, a cross of Alicante Bouchet and Cabernet Sauvignon.
The area gets its name from, General Nicholas Raevskii Jr, son of a hero of the War of 1812, who in 1837 was appointed commander of the Black Sea coast. A fort was constructed in 1839 and named Fort Raevskii after the general. The fort served as an important link in the coastal fortifications between Anapa and Novorossiysk in the chain of coastal fortifications.
Raevskoe conducted its first harvest in the fall of 2011. Grapes were harvested by hand in small boxes, leaving clusters intact and transported under thermal control. Grapes were fermented in stainless steel and then large oak casks under temperature control. Selected fractions were gravity transferred without pressing to oak vats for malolactic fermentation.
Raevskoe has released two wines: Renaissance and a Pinot Noir varietal. Renaissance is a blend of Cabernet Sauvignon, Merlot, Cabernet Franc, Carmenere, Pinot Noir, Petit Verdot and Odessa Black.
[mappress mapid="8" zoom="9"] 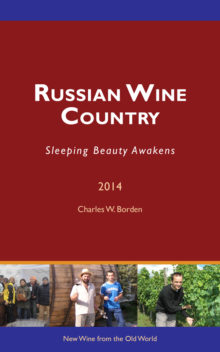